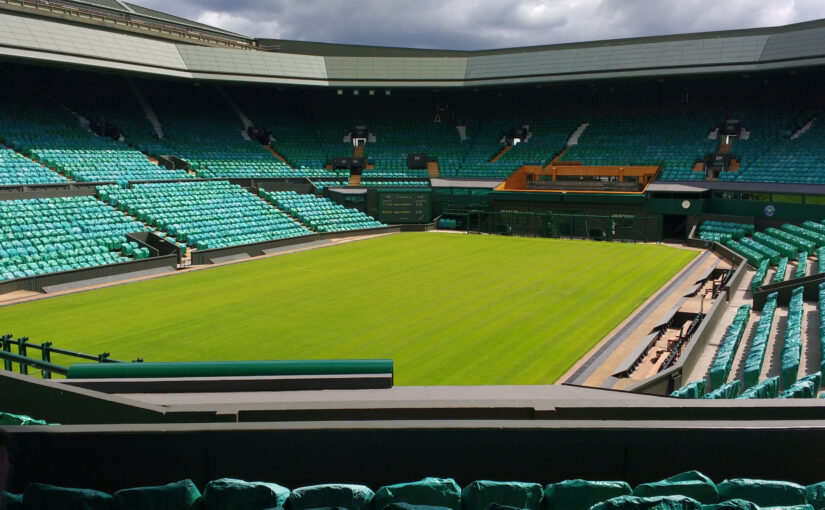 What comes to your mind when you think of Wimbledon? Is it the traditions of strawberries and cream with a glass of Pimm’s? Or maybe it’s more the all-white dress code contrasting with the green of the newly prepared lawns? 2022 marks 100 years of centre court, so it’s a great time to plan to visit the world’s oldest and arguably most prestigious tennis competition. How did England’s fascination with Tennis begin and what makes Wimbledon so special?

Tennis has a lot of history, quite possibly even beginning with the ancient Greeks, Egyptians and Romans! French Monks in 1000 were known to play a ball game with their hands and shout ‘Tenez’ every time they served. Gradually the sport continued to grow in popularity and mitts were developed to replace bare-hands and this led to the invention of the racket. Even Henry VIII took a liking to tennis… He had his own court and often spent hours playing. Anne Boleyn was said to be betting on a game of tennis just before she was taken to the tower of London! Eventually wooden balls and indoor courts made way for the bouncier balls and outdoor courts that we are now more familiar with today. So, it comes as no surprise that England’s fascination with tennis continued to spread to the point where it holds one of the world’s top tennis competitions.

Wimbledon was first hosted by the All England Croquet Club who wanted to find a way to raise money for their croquet lawn improvements. They realised they could adapt their lawns to run the tennis competition. However, the event went from strength to strength and it eventually led to the club changing their name to the All England Croquet and Lawn Tennis Club. The first competition set a lot of the rules for the sport, that are still in force today. One of which being the standard tennis scoring being based on a clock face – 15, 30, 45… but 45 proved to be a bit too long to shout so it was shortened to 40.

The Washington Mayfair Hotel is located a tube ride away from Wimbledon and offers a home from home base for you to enjoy your trip. This year Wimbledon is taking place from 27 June to 10 July. Hundreds of tickets are released daily throughout the tournament so there are a lot of chances to get involved in the action. There is also the ability to queue for more premium tickets or just general admission to the grounds for an unforgettable day out. Maybe you might see the next Andy Murray in full swing!

There are more reasons than just the championships to visit Wimbledon. If you’ve enjoyed this brief history, make sure that you visit the Lawn Tennis Museum. Complete your trip by visiting some of the green spaces, pubs and shops available and even a trip to the Wimbledon Windmill. It’s the perfect place to visit for more than just a great day out. Make sure to take a look at our latest offers and special discounts to get the best out of your holiday in London and stay in the premium district of Mayfair. We are your perfect base for whatever you choose, offering accommodation for all your leisure or business needs.